There have been so many times that I have held my breath, waiting to see who will be cast as a beloved character.  Some have met my approval – Claire and Jamie from Outlander.  Others have broken my heart – I’m pointing at you entire cast of Twilight (yes – it mattered very much to this grown woman).  I completely understood Elle Wittimer from Chapter 1 of Geekerella.  Her world crashes down when her favorite character is clearly miscast .  . . Or is he?

I very much enjoyed this Geek girl version of Cinderella, and I’m not alone – this book has a 4+ star rating with more than 500 reviewers on Goodreads! 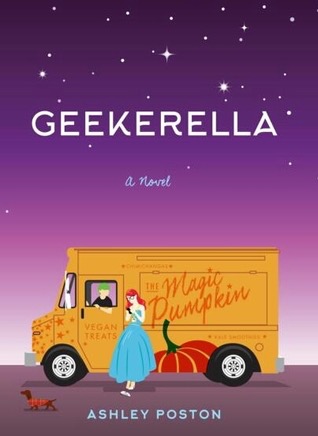 Goodreads Summary
Geek girl Elle Wittimer lives and breathes Starfield, the classic sci-fi series she grew up watching with her late father. So when she sees a cosplay contest for a new Starfield movie, she has to enter. The prize? An invitation to the ExcelsiCon Cosplay Ball, and a meet-and-greet with the actor slated to play Federation Prince Carmindor in the reboot. With savings from her gig at the Magic Pumpkin food truck (and her dad’s old costume), Elle’s determined to win…unless her stepsisters get there first.

Teen actor Darien Freeman used to live for cons—before he was famous. Now they’re nothing but autographs and awkward meet-and-greets. Playing Carmindor is all he’s ever wanted, but Starfield fandom has written him off as just another dumb heartthrob. As ExcelsiCon draws near, Darien feels more and more like a fake—until he meets a girl who shows him otherwise. But when she disappears at midnight, will he ever be able to find her again?

Part romance, part love letter to nerd culture, and all totally adorbs, Geekerella is a fairy tale for anyone who believes in the magic of fandom.

Enter to win a copy of Geekerella on Goodreads until May 1, 2017!

This retelling of Cinderella is a contemporary take, perfect for anyone who has ever loved a fandom.  The decision to make “Prince Charming” a movie star is brilliant, and the fact that his side of the story is an important part of the plot adds a lot to the tale you think you know.  And you do know this story, but if you think that means you won’t feel anxious, you are wrong.  This evil stepmother is wicked, and if her brand of mean feels a bit thick at times, it doesn’t stop you from feeling outraged when she pulls her ugly stunts.  Despite her dark cloud, the modern touches are charming – from the pumpkin themed food truck to the decidedly modern take on the fairy godmother – it is worth reading just to study the parallels.  The vibe is more teen movie than fairytale, but I think it will appeal to a pretty broad audience.   I’m definitely adding it to my high school classroom library wishlist and recommending it to fans of reimagined fairy tales as well as those who love a good fandom.  Language and situations are appropriate for grades 9+, but adults can enjoy it as well.

I received an ARC from the publisher via NetGalley in exchange for an honest review.

We Own the Night is the second in Ashley Poston’s Radio Hearts books.  The first, The Sound of Us, is one that I enjoyed – it has a rock star love interest, so I was game.  I was less engaged by We Own the Night which is narrated by a character who frequently made me grind my teeth, which left me feeling a bit “meh” about it.  Both can be read as stand-alone stories, but I think the best reading experience would be to read them in order because the band, Roman Holiday, is featured in the first book and plays a smaller role in the second.  Both ebooks are under $5.

As a candy store employee by day, and mysterious deejay “Niteowl” by night, eighteen-year-old Ingrid North is stuck between rock ‘n roll and a hard place. She can’t wait to get out of her tiny hometown of Steadfast, Nebraska (population three hundred and forty-seven) to chase her dreams, but small-town troubles keep getting in the way. She can’t abandon her grandmother with Alzheimer’s, or her best friend Micah–who she may or may not be in love with.

But for one hour each Saturday, she escapes all of that. On air, she isn’t timid, ugly-sweater-wearing Ingrid North. She’s the funny and daring Niteowl. Every boy’s manic pixie dream girl. Fearless. And there is one caller in particular– Dark and Brooding–whose raspy laugh and snarky humor is just sexy enough to take her mind off Micah. Not that she’s in love with Micah or anything. Cause she’s not.

As her grandmother slips further away and Micah begins dating a Mean-Girls-worthy nightmare, Ingrid runs to the mysterious Dark and Brooding as a disembodied voice to lean on, only to fall down a rabbit hole of punk rockstars, tabloid headlines, and kisses that taste like bubble tea. But the man behind the voice could be surprising in all the right, and wrong, ways.

And she just might find that her real life begins when Niteowl goes off the air.

After a weak start, this book finds its stride about halfway through, and readers who stick it out will be quite happy with the resolution.  But every reader won’t stick this one out.  Ingrid, the narrator, comes across as a whiner.  She has problems that plenty of us can relate to, and I actually feel really bad about calling her out, but she is a drag.  She cries or fights back tears a lot.  And she doesn’t really seem inclined to do much to improve her own situation, choosing instead to just be angry at others who have succeeded where she feels she has failed.  I understood her – she is at that place where you don’t feel like you can make a move because it will probably be the wrong one, but it isn’t very fun to read about it for very long.  Once Ingrid does shut down the pity party, things really improved, and it is nice to see how she finally figures out who she wants to be.  Teens will probably have more patience with Ingrid than adult readers of YA.  Language and situations are appropriate for grades 10+.

I received an ARC from the publisher via NetGalley in exchange for an honest review.